2017 C8 Chevrolet Corvette Exclusive! What to Expect from the Heart-Stopping, Mid-Engined Zora!

From the October 2014 Issue of Car and Driver

GM’s head of global product development, Mark Reuss, confirms that the company is working on the next Corvette. Our sources elaborate on this salient piece of information, telling us that, after 61 years of evolution, the C8 will be revolutionary. The new Corvette will be the mid-engined American Dream Machine that Chevy couldn’t, until now, muster the courage to build. In truth, the factory is still not prepared to detail what’s coming, which is why you’re looking at the 2017 model year through our freshly waxed crystal ball.

Why mid-engine? Because the C7 Corvette, especially the Z06 edition, is tapped out. Adding more power to a front-engine design only accelerates the conversion of rubber into smoke at the rear. Moving the engine’s mass closer to the drive tires is the most effective means of improving Corvette acceleration and braking.

The second reason is less engineering-driven: Chevy wants to finally move the Corvette past the basic proportions and form language it has used since the C3. Today’s Stingray is a dream car for men on the wrong side of 50. But by updating the exterior with a radical remix of its visual masses, the Corvette could sweep the odd Aventador, LaFerrari, P1, and 918 posters off adolescents’ bedroom walls. As Chevy well knows, kids grow up quickly, and the fortunate ones convert their salaries to sports cars. Read on for how the C8 will take shape. 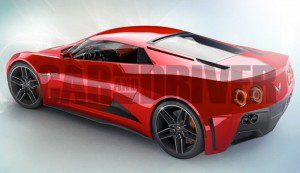